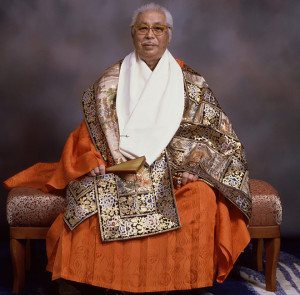 Master Shinjo Ito, founder of Shinnyo Buddhism, has always carried within him a deep desire to share the teachings of the Buddha among the laypeople. Constantly emphasising the need for religious dialogue as a way to attain a peaceful future, Shinjo was convinced that Buddhism would help awaken individuals to extend compassion and lovingkindness to others.

The story of Shinjo Ito’s introduction to Buddhism began in 1936 when he decided to leave his comfortable career as an aircraft engineer and become a priest.  With the support of his wife Tomoji, Shinjo began training in Shingon, a major school of Japanese Buddhism founded in the 9th century CE, at the Daigoji temple in Kyoto. There, Shinjo underwent demanding ascetic training before receiving in 1943 the rank of Great Master (Acharya).

After completing his training, Shinjo concluded that the core teachings of Buddhism could help people find answers to their questions in life, regardless of their creed, faith, and class. This led him to establish Shinnyo-en, which is recognised as a school of esoteric Buddhism in Japan.

Throughout his life, Shinjo has repeatedly underscored the value of true spiritual practice as a source of joy for oneself and the others. He also said that the potential for spiritual awakening is something each one of us possesses and is attainable in our lifetime—for which Shinjo devoted his life spreading the message of peace and harmony around the world.